It is not often that we see a totally new fodder variety on the market these days, but there is a new forage radish available with some interesting features. As you can see from the attached picture, tillage radish has an enormous taproot, capable of penetrating soils to alleviate compaction. 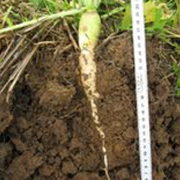 It is most similar to pasja, as it is a quick maturing crop, which can withstand 1-2 heavy grazings. Early grazing will reduce the ability of the crop to maximize taproot size.

Some of the keys features of this crop are as follows:

Whilst it can be sown later in August (similar to a pasja or brassica), later plantings will reduce maturity time (to as short as 8 weeks) & grazing time, as it runs into longer days.

Tillage radish can be sown on its own or in combination with a winter fodder crop such as oats or triticale to provide a greater diversity in the diet & offset the effects of compaction. I have seen the crop grown locally this autumn with outstanding early dry matter production (e.g. 5 t DM/ha in 3 months).

Early results indicate that some alternative legumes are likely to have substantially lower critical P requirements than subterranean clover. However, these trials are only in their infancy & are expected to run for several years. I will keep you posted of their progress & trial results as they come to hand.

Insect Pests to Watch out for this Winter

Bryobia mites have been causing damage to establishing crops across NSW and northern Victoria this year.

The adult mites are slightly smaller than a pin head with a dark grey body and pale red/orange legs. They are easily confused with red-legged earth mite and are difficult to separate without the use of a hand lens. The front pair of legs on bryobia mite are very long and held out in front of the body like a pair of feelers. The body of the mites is rounded and plump. Bryobia sometimes present control challenges but the good news is that populations will wane as winter approaches; they are more of a warm-season pest.

Redlegged earth mites continue to hatch across many regions, indicating the need to monitor. Newly sown crops & pastures are particularly vulnerable at emergence.

Now for the Weather

The El Niño-Southern Oscillation (ENSO) indicators in the tropical Pacific continue to strengthen, indicating that an El Niño event is now well established.

Sea surface temperatures have exceeded El Niño thresholds for nearly two months, supported by warmer-than-average waters below the surface. Trade winds have remained consistently weaker than average since the start of the year & cloudiness at the Date Line has increased.

The Southern Oscillation Index (SOI) has dropped further over the past two weeks, remaining firmly within El Niño values. The latest 30-day SOI value to 24 May is −17.4. The 30-day SOI has remained below El Niño thresholds for more than two weeks. The 90-day SOI has also dropped below −10; indicative of a persistent three-month period of higher atmospheric pressure in the western Pacific.

All international climate models surveyed by the Bureau of meteorology suggest that the tropical Pacific will continue to warm throughout winter and spring, with the El Niño continuing to strengthen.

And on a Lighter Note

A senior citizen drove his brand new Holden Senator out of the dealership.

Taking off down the road, he pushed it to 120 kph, enjoying the power of the car...

“Amazing,” he thought as he flew down the F3, pushing the pedal even more.

He floored it to 140 kph, then 180kph, then suddenly he thought, “What am I doing? I'm too old for this!” and pulled over to await the copper's arrival.

Pulling in behind him, the copper got out of his vehicle and walked up to the car.

He looked at his watch, then said, “Sir, my shift ends in 30 minutes.

If you can give me a new reason for speeding - a reason I've never before heard - I'll let you go...”

The old gentleman paused then said, “Thirty-three years ago, my wife ran off with a policeman; I thought you were bringing her back.”

“Have a good day, Sir,” replied the copper.