We often consider testing stored fodder (cereal grains, hay & silage) for quality before feeding to livestock. However, it is worth considering sampling your pasture or fodder crop this spring, especially for those paddocks intended for hay or silage.

By sampling your silage or hay paddocks prior to cutting, you’ll be better informed to answer some fundamental questions: 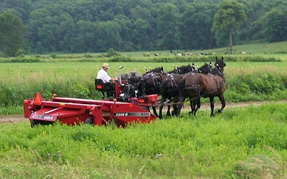 Feedtest offers a range of test packages to test the quality of your crop/pasture, but the most common test used is the Fodder quality (NIR) test. This package will test for the following quality parameters:

Your report will also include a brief explanation of your results, & if you require any further clarification, you can always contact the Feedtest team.

To provide an accurate, meaningful sample, collect forage samples within 1-2 weeks of harvesting as follows (for further details: www.feedtest.com.au):

It's All in the Timing

The performance of a herbicide is dependent on a range of factors - herbicide rate, weed size, temperature & rainfall are a few that spring to mind. But one of the most critical factors which affect herbicide performance is time of application. Here are a couple of examples of herbicides which rely heavily on sunlight to achieve optimum results.

Paraquat requires sunlight for activity, however research in Australia, the United States & Japan has shown that by spraying paraquat towards the end of the daylight hours (or on cloudy days), you can improve weed control.

Paraquat diffuses through leaf tissue in cell walls, but as cells desiccate this limits how far it can penetrate into the plant. The reason for improved activity under lower light intensity is because paraquat’s fast speed of action is slowed, allowing slower dessication of the weeds which facilitates further movement through weeds to give a more thorough kill when the sun rises the following day. This effect is highlighted in Figure 1.

Broadstrike contains the active ingredient Flumetsulam which is a member of the Sulfonamides chemical group. These chemicals inhibit an enzyme in the plant called Acetolactate Synthase or ALS, which is essential for the synthesis of the amino acids valine, leucine and isoleucine. Amino acids are the building blocks of protein and are essential for plant growth.

Warm conditions greatly improve the activity of Broadstrike and consequently best results will be achieved either early or later in the season when temperatures are milder (at least 10ºC and preferably 15°C if possible). Better results in winter are achieved by spraying on a sunny day compared to an overcast day. If spraying in winter, stop by mid-afternoon (3 pm) to allow time for absorption of the chemical into the weed.

There are many other examples of the effects of our environment on herbicide performance, so remember to check product labels for further information (often located under the ‘restraints’ or ‘General instructions’ sections of the label).

Now for the Weather

The Bureau of Meteorology is continuing on its trajectory of a strong El Niño event persisting until the end of 2015.

The El Nino event currently affecting the Pacific Basin has continued to strengthen. All major international climate models continue to forecast its climax during the Austral summer. El Nino indicators are now at their strongest since the 1997-1998 event.

The Southern Oscillation Index (SOI) continued its negative trend, reaching -19.8. Sea surface temperatures (SSTs) across the equatorial Pacific exhibit the typical pattern of a mature El Nino, with warmer SSTs along the central and eastern Pacific and cooler SSTs across the Maritime Continent.

During El Nino, eastern Australia and some parts of southern and central Australia tend to see below-average winter and spring rainfall. Having this in mind, the general consensus is for below average rainfall across the eastern states during the coming months. However, there is no direct correlation between the strength of an El Nino and its effects on rainfall across the Australian continent. On the other hand, very warm SSTs over central parts of the India Ocean are likely to increase the moisture in the atmosphere.

While El Nino is likely to lead to decreased rainfall totals across eastern Australia, the near record warm central Indian Ocean is likely to bring increased chances of above average rainfall across western and central parts of the country over the coming months. Moreover, the consensus from most international models suggest a weak positive Indian Ocean Dipole (IOD) is likely during the Austral spring. A positive IOD could potentially exacerbate the drier conditions across southeastern Australia.

In summary, the combination of El Niño with the record warm sea surface temperature (SST) pattern in the Indian Ocean is producing roughly equal chances of a wetter or drier three months in the eastern half of the country. Once again, we have an each way bet on the weather!

And on a Lighter Note